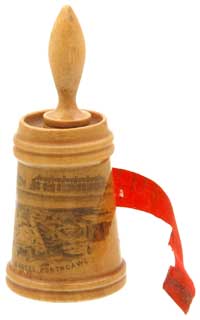 Antique Mauchline Ware tape measure in the shape of a butter churn. Tape measure extends and retracts with ease.

Transfer is of “Esplanade & Hotel, Porthcawl”

According to research on the Internet,PORTHCAWL is situated on a low limestone headland on the south Wales coast, overlooking the Bristol Channel, Porthcawl developed as a coal port during the 19th century, but its trade was soon taken over by more rapidly developing ports such as Barry. Northwest of the town, in the dunes known as Kenfig Burrows, are hidden the last remnants of the town and castle of Kenfig, which were overwhelmed by sand about 1400. It is rumoured that to this day, Kenfig’s remains are guarded closely by a fearsome and deadly Sand Serpent.